A Vehicle for Efficiency: FlenTek Solutions Shares Their Shift to Cloud ERP

Joe Lewis from FlenTek Solutions discusses their shift to cloud ERP and how that change has positively affected the company.

Carl Lewis: Welcome to The Connected Enterprise podcast. I’m Carl Lewis, your host from Vision33, and my guest today is Joe Lewis from FlenTek Solutions. Joe, tell us about yourself and your company.

Joe Lewis: Hello, Carl. I'm the president and CEO of FlenTek Solutions. We've been in business for 16 years. We design and manufacture motor controller systems. Those are the brains of the vehicle. If you're looking at internal combustion, it’s the main computer in the engine. On an electric vehicle, it’s a controller and a motor. We design and manufacture them for forklifts, ATVs, AGVs, autonomous vehicles, etc. It's good business. We also sell a lot of color systems for people measuring the color of food, paint, plastic, or injection molding stuff. That can change the way you eat.

Carl Lewis: Thank you, and thanks for being here today. I was intrigued by your story when we met because when the pandemic began, many companies scrambled to do business remotely, but you put your business systems in the cloud before that. Can you tell us why and how it prepared you for what was coming?

Joe Lewis: During the holidays, we sit down with our financials and talk about what worked and what didn't over the year. One year, we noticed we spent $10,000-$12,000 on IT support just for our database. I recall watching this guy sitting there, waiting for an answer from the people who had the database. At $200 an hour, I was pulling my hair out.

I thought having the servers in eye view meant I had control of my data. But I had to load new software updates and other stuff. And I realized if we put it in the cloud, I wouldn’t have to do that. I’d get more time. I wouldn’t have to remember to leave my computer on so I could log on when traveling.

It worked out better to go to the cloud because our people work all over. Everybody is connected. You can go on vacation and log on if something comes up. Not that I’m saying you should do that. But it’s nice.

Carl Lewis: For a business owner, it's hard to go on vacation and not want to check in.

Joe Lewis: That's what our whole dashboard is about. I can log on and see how many sales orders have come through and similar things, so I know if we’re on track.

Carl Lewis: Was the transition easy? Because other business owners had the same attitude as you: They liked to touch their servers. And you felt like people weren't productive. What changed? How did FlenTek adapt?

Joe Lewis: We immediately discovered standard DSL service doesn't work. I had people staring at the hourglass; nothing was happening. So, I had AT&T dig up our parking lot and put in a dedicated fiber optic high-speed line. That worked.

The other issue was getting people to understand what SAP was. We had a group of people who don’t work here anymore thinking it was cute to call it sap, like the stuff that comes out of trees. That upset me because it made me look dumb. But we moved past that as far as understanding. We like what SAP has done regarding access and authorization. We can lock people out. People can’t get access to things they shouldn't see. And it’s easy to set up.

In our old system, I thought it was cool that anytime you sent an email, that information was in the customer records, and you had a history of every transaction. But everyone had access, so anybody could read my emails or the CFO’s emails. Some people figured that out and started reading about salary discussions, performance reviews, etc. They thought that was cute, but we needed to stop that because there are things employees don't need to know. It's none of their business. SAP solved that.

Carl Lewis: Sometimes people have a hard time with change. But then, along came the pandemic. And you had a new system people suddenly had to use at home. You have operational people in your warehouse, but how did the pandemic affect you? How did the switch to remote work go?

Joe Lewis: Here in Georgia, it was interesting because when they shut down, they said everybody couldn't go home to work. That was fine because we could still get access, take orders, send quotes, and have conversations. But we had to modify it. We worked from nine to noon to ship things because we knew UPS would come between nine and ten and then in early afternoon. After UPS left, people went home and worked because we have customers on the West Coast.

That worked out well. The problem is, as the CEO, I forget what the clock says sometimes. I’d call an employee to ask if I could do something, not realizing it was 6:30 pm ET. We had to deal with issues like that, but if you focused and got the job done, you kept your job. And we had to bring in money because everybody else was losing jobs and money. But we stayed in operation.

Carl Lewis: Small businesses are famous for not making changes until they're forced to. Like you said, everything costs money. And there's never a lot of it to go around. But you deserve to be well thought of for being forward-thinking and moving to the cloud before you had to. What would have happened if you weren't already in the cloud when the pandemic happened?

Joe Lewis: We would've had to do a staggered work schedule to keep people physically distanced—a group in the morning and a group in the afternoon. It would've been difficult. Many of us put in a lot of hours already, but shifting to people coming in at alternating times would've been a problem. Not because you necessarily have to watch people but because collaboration is critical.

And no travel. I got great perks from the 150,000 miles I flew every year, but I don't miss it. Now, if I talk to a customer, I set up a Teams meeting, and the sales cycle is cut way down. We can do demos and all those conversations through this SAP work. My ISO audit is coming, and I'm hoping to get version 10 up and running so I can wow her with the finance screen, the inventory screen, etc. Everything she wants to talk about. She asks, “What’s your process?” And I say, “Here it is." And instead of scrolling, scrolling, scrolling, I just push a button and a new screen comes up.

Carl Lewis: Absolutely. It's great to hear you’ve gotten these benefits from the cloud deployments and taking on new things like Microsoft Teams. I’m glad they’ve been good for business, not just from an experience or survival perspective, but from a revenue perspective.

Carl Lewis: Revenue is always good. Has this benefited you personally, as CEO?

Joe Lewis: Yes. I know we need to cut out the noise and relax sometimes, but if everything is in the cloud and something comes up, like a great idea, I have access wherever I am. Recently, I realized we've been doing the price list wrong—well, not wrong, but we can do it better.

And this weekend was an example. I saw we can set up a price list not for discounting, but for raising prices. A reseller, for example. I may put on there a 1.2 increase in the price as compared to it always being 0.8. That saves us time because we get many resellers who want that price. And we’ve been arbitrarily raising the price, but now we can create a formal process where, if you're a reseller and you call in, and we code you that way, you have a different price list. So, I know across the board everybody's doing the same thing. It's not Sally doing one price and Sarah doing a markup—it will automatically come across the same.

Carl Lewis: It sounds like you can make more global decisions that the system is helping you manage.

Joe Lewis: Exactly. We have version 9.3. We had outstanding quotes back to 2017, and I decided it was time to clear some of them out. With 9.3, you have to physically go to each one and close it, or you can highlight them and do a quote. The highlighting gets a little dangerous because you need to do it right. The nice thing about 10.0 is that you can put a checkmark on each one you want to close, which makes it easier. Because once you close something, you can't unclose it. That's one thing that's nice about SAP—it’s unforgiving when you do stuff like that. If you close it, you can't bring it back. You must create a new one.

Carl Lewis: A strongly enforced audit trail, for sure. Which is a good thing.

Joe, I appreciate hearing your story and sharing with others how you got through the pandemic and how the cloud was a big part of that. Do you have advice for those considering moving their on-premises systems to the cloud?

Joe Lewis: First, make sure your hardware is up to speed. You need fast computers because you can’t make a turtle sprint. So, if your computers are turtles, you need faster ones. Also, talk to your IT people. How fast is your internet for uploading and downloading data?

Then, trying to understand that now you won’t have to deal with the updates. Updates are a problem. They take too much time. And you may be able to cut some of your IT budget because you’ll need fewer people. For example, we came in today and couldn't get on to SAP. We emailed support, and 20 minutes later we were up and running. That's great compared to running around to find the IT guy and making him research it.

Carl Lewis: It sounds like your business didn't have internet dedicated to the building you were in.

Joe Lewis: It didn’t, but it does now. That’s the best thing we did. Many small businesses start with DSL. Then they go to the cloud, everything slows down, screens lock up, people are upset. You need dedicated high-speed access to the internet.

Carl Lewis: Great advice. Well, Joe, thanks for joining me today. I think others will appreciate your story. The best to you.

Carl Lewis: You’re welcome. And for everyone else, please join us again on The Connected Enterprise. Until then, stay connected. 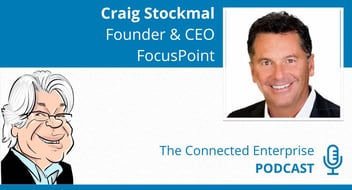 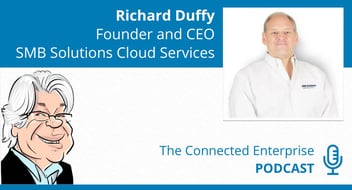 A Technology for the Times: Richard Duffy Discusses the Cloud 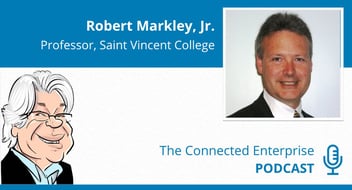