Carl Lewis: Welcome to The Connected Enterprise podcast. I’m Carl Lewis, your host from Vision33, and my guest is Steve Strout, who I’ve known for 15 years. We met at the America SAP user group when Steve was the CEO. Now, Steve is with a company called Miovision. Welcome, Steve. Please tell us about yourself and Miovision.

Steve Strout: Thank you, Carl. Miovision is a software and hardware company based in Waterloo, Ontario, Canada. We build hardware and software for the traffic industry, ensuring traffic lights work correctly. We also do traffic studies and help traffic engineers with planning. How many vehicles there are, how fast they go on average, how often people run red lights, safety issues, etc. I joined about a year ago as the president, and we've had a bunch of fun since then. We’re growing, we’ve done a couple of acquisitions, etc.

Carl Lewis: When I was 30ish, I almost took a job near there. I could have been Canadian! But it didn't turn out. I took a position in Michigan, which wasn't that far away.

Steve Strout: And just as cold.

Carl Lewis: Absolutely as cold. Steve, you've been there a year, so this is a good perspective. You jumped in at the beginning of the tail end of the pandemic. If you think we're out of it, that is. What was Miovision’s experience?

Steve Strout: We had trouble with the cultural aspects of it at first. A big part of our culture was surrounding ourselves with people we liked and thought were smart and engaging and spending time with them physically. Then everybody was forced to work remotely, and the initial reaction was, “We just have to survive it.” But as it progressed, we started asking how to keep that culture we enjoyed—but remotely.

We have about 300 people, and the facility is big enough for 400, so we brought some people back with significant social distancing. But people got used to working from home and liked it. Now, we’ve opened back up, and anybody who wants to come in can. Two or three days a week, we have 20-40% of the staff in person.

But mostly, people are working from home. Several people left the area entirely. There's been an ebb and flow. We decided to reduce the facility’s footprint and use some of the money to bring people together. Hopefully quarterly, but at least twice a year.

Carl Lewis: I'm glad you mentioned culture. It seems like you don't miss it at first, but humans will have a nostalgic feeling about it one day—like, remember when we used to work in person? But it’s good that companies are thinking, “How do we create the old culture with the new situation?” Because we're not going back. It's still evolving, but the topic of culture, why people want to work here, and what they enjoy is immense.

Steve Strout: It is. We ask our teams, “What do you want?” And we'll respond to that. So far, they like the hybrid model, and we can dial up or down any aspect. But you have to work harder when it’s more remote people than in a single location. And we've acquired companies—one in Phoenix, one in Pittsburgh. And Belgrade in Serbia. So having people globally is part of our new culture, whether or not we wanted it. We must be purposeful in addressing that.

Carl Lewis: What technology steps did Miovision take to ensure you’d get through the pandemic and be better prepared for the future?

Steve Strout: We mostly use SaaS-based applications, but there were several in a server closet in the office. We had to move those to AWS quickly and change how we deal with security and access management. We did that, and now we’re assuming we’ll always be hybrid. The technologies need to reflect how we work. We spend a lot of time doing this—we're on video calls a good portion of the week, and software engineers use technologies inside of EPM and AWS as we work in containers like Kubernetes. We want everybody to be able to get everything from anywhere.

Carl Lewis: The cultural situation takes some brain power, and you talked about things you're doing. I recently participated in a team-building murder mystery.

Carl Lewis: There were probably 20 people. The company we hired took the lead, and we just played our roles. There are other companies like that popping up. It’s combining technology with culture creatively. Some of it used to happen around the water cooler. Now you must work harder at it.

Steve Strout: Yes. You need to be purposeful. We use several collaboration tools, like Miro. It lends itself well to everybody contributing and seeing other people contribute. Collaboration has actually increased because now it’s real-time versus scheduled, like in meetings.

Carl Lewis: Miovision seems to have had a global focus early in its existence—it was always part of the plan. From your perspective, was the rest of the world different than North America in dealing with the pandemic?

Steve Strout: Yes and no. Canada was much more like Europe regarding masks and showing your vaccine card to go to public places. Whereas in the US, it was like a badge of honor to not wear a mask. Every country handled things differently. And you had to work with whatever the rules or customs were, regardless. We didn’t see a negative impact one way or the other. We had a lot of conversations about making we were respectful to those around us because it became such an emotional issue for people.

Carl Lewis: That's an interesting perspective. I know people clash—especially when you throw politics into it. It was a wise leadership move if you removed that by talking about caring about each other and being respectful.

Steve Strout: It was interesting when we had to do stuff differently in Canada versus other parts of the world. I live in Atlanta, but it gave us a different perspective and forced us to be purposeful in conversations with potential customers, partners, vendors, etc. We worked hard to be apolitical.

Carl Lewis: And you're dealing with global companies, but also municipalities, cities, local governments, etc. How are spending decisions made for companies like Miovision that exist in different countries?

Steve Strout: Business-to-government (B2G) selling is different from business-to-business (B2B) and business-to-consumer (B2C). Many government agencies are so constrained by funding that the scrutiny isn’t on politics, it’s on not spending enough versus spending too much. No matter what you do, you're wrong, and you need a good business case you can communicate well to agencies. Governments also often can’t afford high-priced talent, so there’s high turnover because people get recruited to the private sector for better pay.

In B2C and B2B, you've got a good product, and you sell it. But in B2G, it's a lot more difficult. Sales cycles go out to 12-18 months. You do a lot of education and other things in advance, which drives up the price because you have to build it in to the cost. And you’ll still get into situations where you've got a tough time before somebody says, “We can afford to do this now.”

And they tend not to buy an entire city's worth. For example, we sell video traffic detection. Some cities/municipalities can afford only 10% of the city at a time—so it might take 10 years to roll it out. And in technology, 10 years is three lifetimes. By the time they finish, the stuff they started with is obsolete.

Carl Lewis: I think generally, in Canada and the US, our dense bureaucracies make it hard to get approval on things. Other governments are faster at decision-making.

Steve Strout: Unquestionably. In Europe, they outsource the whole thing. “Here’s the SLA, here's what we're willing to pay, and here are the SLAs you update regularly.” Then, every three, four, five years, they're improving. And in the Nordic countries, I think it's a three-year turnaround. They see it as an investment in the quality of life versus how much money they’re spending.

Carl Lewis: We often hear that cities/municipalities are behind from a technology perspective. And our infrastructure is old, whereas much of the rest of the world seems newer. We’re really into “If it ain't broke, don't fix it.” We use it till it dies.

Steve Strout: Yes. And that's why there are cities using traffic light technologies from the late ‘70s/early ‘80s.

Steve Strout: People think they're getting their money's worth—but they don’t look at the true cost of ownership, as those of us in the technology industry have looked at for years. Do you need 50-year-olds to work on the stuff because nobody younger knows what to do with it?

Carl Lewis: Exactly. You mentioned that businesses are struggling to find people—and it didn't occur to me that one of their sources would be government workers.

Carl Lewis: Because they leave to go where the money is. That's probably hurtful to our city governments.

Steve Strout: It is. Some people work in the cities/municipalities because they feel it's the right thing to do. They're investing in their community. And some people let the government train them and then leave because the money is significantly higher in the private sector. You can understand their perspective—and you can't fault them for wanting to take care of their families.

Carl Lewis: I’ve been there. I left what I thought was the career of a lifetime because I had to make money. Those decisions are essential sometimes. Steve, I have one last question: What's in the future? Where can Miovision’s technology go next?

Steve Strout: The automobile industry is driving a lot of it. Auto manufacturers have been connecting their vehicles to other vehicles and other things. The connected vehicle will become an essential part of our lives. It's not just a car—it’s a bike or a scooter or a pedestrian. It becomes much more pervasive. Hundreds of millions of vehicles have been in this connected vehicle situation for a while. And there’s an opportunity to significantly improve how we do multi-modal transportation and connect things to make them safer. It also reduces greenhouse gases.

And reduces aggravation. When you can time your vehicles to flow calmly, without fits and starts, you get significantly improved living conditions. Over the next 5-10 years, we’ll see a significant investment in that and a huge improvement in the quality of life and transportation. I'm not saying it's all autonomous vehicles, but driver-assist types of technologies. If my car can talk to your car in the next lane, we can make sure they never collide.

If I'm coming up to a red light and I know somebody’s in a crosswalk who won’t get across in time, I can tell my car to slow down or stop. These technologies aren’t to replace us or do all the driving for us—they’re to assist us so decisions are faster and more accurate.

Carl Lewis: That will be interesting to see. Sadly, I won't be part of it because my 1965 El Camino doesn't have a computer, and that's what I'm driving every day now.

Carl Lewis: Yes. I know I'm not helping the environment a lot when I do that. So, I make my contributions in other areas. Well, Steve, it's always great to chat with you. Best of luck at Miovision. And to everyone else out there, until we meet again, stay connected. 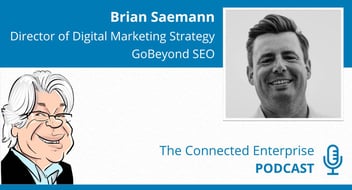