SAP Business One 9.0 performance and infrastructure enhancements - A faster, smarter and safer ERP solution for SMEs.

With so many new features being introduced in SAP Business One 9.0, questions may arise as to how your businesses current server and computer systems will adapt to all of the new feature rollouts. The engineers, developers and small business experts at SAP have recognized such issues and in response have implemented a number of Client and DIAPI (The interface between Business One and other systems like websites, add-on software, web entry software for timekeeping, etc.) performance and infrastructure enhancements in SAP Business One 9.0 that work seamlessly with your businesses current systems so you can continue to get the most out of your ERP solution.

One of the most notable performance enhancements that will be introduced in SAP Business One 9.0 is 64-bit compatibility for both the Client and DIAPI. Current versions of SAP Business One are 32-bit compatible, even if you operate a 64-bit system, meaning your Client and DIAPI hit a maximum RAM allowance of 3.25 gigabytes. Most users won’t find a need for large amounts of RAM, unless they are running an ERP system that requires the management of vast amounts of data to be sent back and forth between various systems. RAM can send and receive data faster than a hard disk, therefore the more RAM that is available, the more information a program can store for quick access. With a 64-bit system, the maximum allowance of RAM is estimated at 16 Exabyte's – more than enough memory to run an ERP system seamlessly for your small to midsize business.

more is most definitely better. With the 64-bit version of SAP Business One, applications run 2-times faster than applications running on a 32-bit system. This is possible because a 64-bit system send 2-times larger blocks of data to the processor for processing and calculation, allowing you to send and receive data at much greater speeds.  Processes may take as long as 8 seconds to complete on a 32-bit system, but will only take a maximum of 4 seconds on a 64-bit system. Having a 4 second response time is instrumental in sending, receiving and processing more data in a shorter period of time, resulting in a greater turn-around of every day tasks.

With all of the new performance and infrastructure enhancements coming to Version 9.0, you will be equipped with a faster, smarter and safer ERP solution that will run seamlessly with your existing systems.

To re-cap, here are the Top 5 Best New Features in SAP Business One 9.0 as selected by the Vision33 TOTAL Care Team that you can look forward to in the upcoming release: 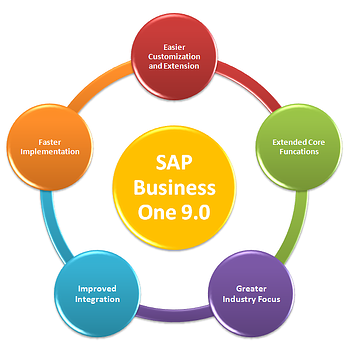 The Updated Project Management Feature for SAP Business One 9.2