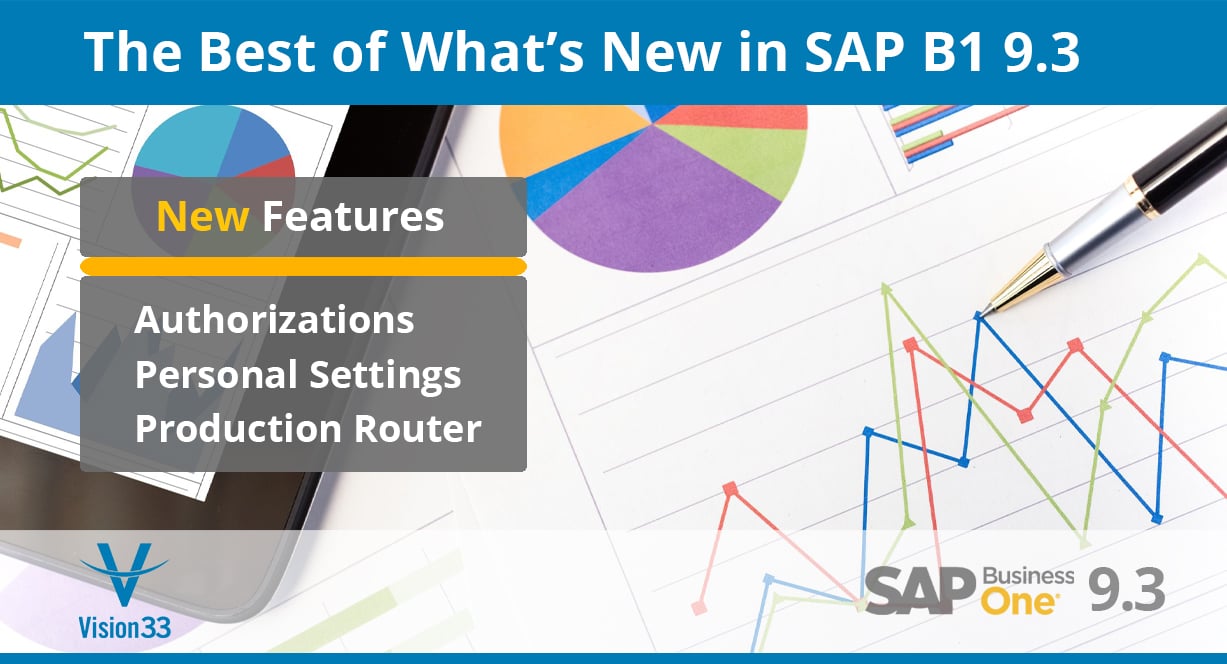 Does your business need more than accounting tools? SAP Business One, from financial systems leader SAP, has been long since been recognized as the next logical software for small to midsized enterprises (SMEs) who have outgrown accounting applications like QuickBooks. And for a good reason; unlike many off-the-shelf accounting packages, SAP has a clear product feature roadmap for its business management solutions. This fact is made clear with the upcoming release of SAP Business One version 9.3 which is host to many new features requested by the user community. And while there are certainly other factors one should consider when choosing an ERP solution, the fact that SAP listens to the needs of business users is very reassuring. With each new version of the company’s flagship midmarket business solution, the feature set continues to grow and improve; this makes it an ideal choice for any SME that wants to streamline its operations or achieve its goals for growth.

In anticipation of the new release of SAP Business One, Vision33 has been previewing some of the highly anticipated features and enhancements. If you’ve missed previous entries in the series, you can read part 1, part 2, and part 3 on the Vision33 blog. This week, the focus is on Authorizations, Personal Settings, and the Production Router in SAP Business One version 9.3.

Users will be happy to learn of the enhancements made to Authorizations in SAP Business One version 9.3. While User Groups have existed in SAP Business One for some time now, the latest enhancements help manage authorizations more easily. There are now several authorization group types: Authorization, Form Settings, and Cross All types (a combination of the previous two). Once a User Group is set up, you can pick users from a list to assign to that User Group. When assigning authorizations to the User Group, any user therein inherits all of them. This is particularly helpful if you have a large list of users because you can apply rights and privileges to the entire User Group which will propagate down to each user, rather than assigning rights one by one.

You can also work backward from the user level as well. If you open a user record, you can assign a group to that user from within the user’s record. It’s also possible to copy form settings from one user to either another user or a User Group; another time-saving feature which takes the work out of applying form settings to a large list of customers at once.

User defaults is an area that is seeing more user customization in SAP Business One version 9.3. You can now set up different groups for user defaults including things like: defining which warehouse users in a user group are selling out of as well as defining the Tax code used by that user. What their form screens will look like and what font size they’re going to see when using SAP Business One can also be customized. There’s a new icon called “My Personal Settings” where users can customize general settings and their own display, instead of using company defaults. So, if a user has trouble reading small font, it will change size for them but not for others. They can even change the default language displayed by SAP Business One. Overall these new authorization and personalization enhancements make life easier for businesses running on SAP Business One - especially for those with more than 30 user licenses.

Previously SAP had added the Generate Pick list feature for production orders. You can pick these and issue them all at once against a production order. You can also do this now under Inventory using the Pick and Pack and production manager. You can now can issue materials to production orders and even sort it by routing stage and pick a stage such as product preparation, and release it to a pick list. Which will then trigger the Pick List Generation Wizard from there. For a long time, users have been asking for routing stage support, so these features are welcomed additions.

More Articles in the Best of SAP Business One version 9.3 Series:

Part 1: The Best of What's New